Nigerians have been advised to see themselves as one indivisible entity, tolerate one another and always live in peace irrespective of religion and ethnic difference for the country to witness meaningful development.

The Olosi of Osi, and Chairman, Traditional Council, Ekiti Local Government Area of Kwara State, Oba Salihu Abdulkareem Adasofegbe gave the advice during this year’s Hijrah celebration and launching of the Islamic calendar organised by the Council of Imam and Ulamaah in the Local Government.

Oba Adasofegbe enjoined Nigerians to tolerate one another and always live in peace irrespective of religion and ethnic difference for the country to witness meaningful development.

The monarch also stressed the need for the people to support government in the fight against poverty, corruption and terrorism, as the government cannot do it alone.

Similarly, the Owa of Eruku, Oba Busari Olanrewaju and the Olowaa of Owa-Atun, Oba Moses Ogunyemi called on the masses to be patient and always support government policies and programmes for the over all benefits. 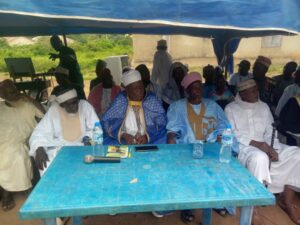 In a remark, the Chief Imam of Osi, and Chairman Council of Imams and Ulamaah in Ekiti LGA, Alhaji Abdulsalam Saadudeen Ajisefini appealed to Kwara State Government to work on timely completion of KWASU campus in Osi as well as other developmental projects in the area.

Imam Abdulsalam Ajisefini also called on government at all levels and other stakeholders to join hands in addressing the lingering security challenges in the country. 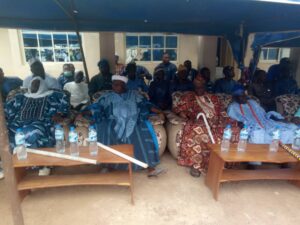 Dr Raji AbdulRazaq commended them for maintaining peace and tolerance among themselves, noting that hijrah symbolises peace hence the people should continue to live in peace and also support Governor AbdulRahman AbdulRazaq.

In a brief lecture, the Chief Imam of Epe-Opin and Chief Missioner, Ekiti Council of Imams and Ulamaah, Ustaz Muhammed Bashir admonished Muslims to let the lessons of hijrah reflect on their daily activities by loving their fellow being and staying away from all sinful acts.

Imam Muhammed Bashir also urged the government and leaders at all levels to proffer lasting solution to economic and security challenges in the country with much emphasises on the fight against corruption and poverty.

The Hijrah celebration which featured Quran recitation, Madiu Nabbyy and Launching of the 1444 Hijrah Calendar was attended by royal fathers and eminent personalities across Ekiti Local Government including the representative of Chief Jacob Rotimi, SAN who hails from Owa-Atun Community.