The Emir of Ilorin and his environs, His Royal Highness, Mai-Martabah, Alhaji (Dr.) Ibrahim Sulu Gambari, CFR, has inaugurated the 14-member Hosting Fathers, Elders and Mentors Committee(HFEMC) for the 79th National Islamic Vacation Course(IVC), tagged “KWARA2022″, to be hosted by the Muslim Students Society of Nigeria(MSSN), Kwara Area Unit.

The National (IVC) is scheduled to hold between the 22nd – 28th of December, 2022 at two different locations within Ilorin Metropolis Kwara State capital.

The inauguration, which took place at the palace of His Royal Highness, Wednesday, August 10, 2022; Yaomal Arba’a, Muharram 12, 1444AH was witnessed by important dignitaries from various works of life in the state, including leadership and members of the Muslim Students Society of Nigeria(MSSN), National Headquarters and Kwara Area Unit.

Inaugurating the 14-member committee, the Emir of Ilorin, who is also the Grand-father of the Hosting Committee, congratulated all MSSN, Kwara Area Unit members and Kwarans on the occasion of the flag-off, noting that the organization is one of the oldest Islamic societies in the history of da’awah activities in Nigeria established on April 30, 1954, with members across the country.

The Chairman of the Kwara Council of traditional rulers disclosed that MSSN has produced people of ‘timber and calibre’, including royal fathers, seasoned administrators, legal luminaries, Khadis, educationists, astute politicians and captains of industries, among several others.

The Emir, who affirmed his membership of the Society and his full participation in the event, and support toward the drive for successful hosting, also appreciated the MSSN for their decision to hold the event in Kwara and prayed for its success.

In his submission, a member of the committee and the Emir of Tsonga in Edu Local Government Area of Kwara State, HRH, Dr. Haliru Yahaya, who acknowledged the Emir of Ilorin, was full of praises and happiness to be part of the inauguration, urged all participants to be more cautious of Morals, which he said has gone away from our society.

The former Chairman of the National Primary Health Care Development Agency and an advocate of proper attention and funding to Primary Healthcare in the Country, to ensure quality healthcare services for the people, observed that the extent of moral decadence in the country is beyond proportion, calling on all parents to pay more attention on their wards, especially on the use of phones, which he said has taken over the morality of the country.

The monarch who is also a strong advocate for the eradication of most diseases, especially Polio, Guinea-Worm, and Leprosy, called on all committee members, members and participants to see the assignment and the event as a call to service from Allah, urging them to try and play their roles.

Earlier, in his opening address at the event, the MSSN Board member and National Chairman of Hijrah Organization of Nigeria, Prof. Badmas ‘Lanre Yusuf, said, ” I wish to present MSSN as the youth vanguard with lineup programmes that are soul inspiring with modern educational pursuit which is aimed to shape the lives of our children need to be empowered now and beyond to combat the social menace that is bedevilling our society as the popular slogan says of ‘’MSSN; the hope of the Ummah’’. 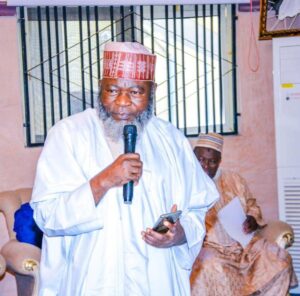 While praising Allah for His mercy, Prof. Yusuf congratulated everyone for witnessing the event, especially, the Emir of Ilorin, for witnessing all the good things that are happening during his reign, praying that may Allah elongate the Emir’s life in the service of Allah and humanity.

“We are here today to receive the blessings of our dear and revere father for the 79th National Islamic Vacation Course(IVC) which is slated to come up from 22nd to 28th December 2022. National IVC is a week-long programme which usually comes in December of every year. The programme attracts students from primary up to university levels. The main activities in the camps among others include lectures, ta’alimat, classroom instructions, Da’awah outreach, visitations, an interactive forum, skills acquisitions as well as the issuance of communiqué”, he said.

Prof. Yusuf added that the programme is aimed at improving Muslim skill acquisition, creating interaction between Muslim youth and providing platform wherein Muslim youths will have access to participate in Da’wah activities and receive classroom instructions from different Muslim scholars all over the country.

“The National IVC is to be held in the two zones of the society namely the ‘’A’’ zone and the ‘’B’’ zone. The Muslim Students’ Society of Nigeria, MSSN “A” Zone comprising the 19 Northern States and FCT has decided to stage the 79th National Islamic Vacation Course (IVC) in KWARA, from 22nd–28th December 2022 tagged (KWARA ‘’2022’’). The total number of expected participants is Four thousand (4000+) in this year’s National IVC and the programme is aimed at training and inculcating the Islamic values in the Muslim students, which draws its participants from the 19 Northern States & FCT”, he stressed.

According to him, a programme like this expected to handle affairs of over 4000, will cost the state a huge sum of Fifty-Five Million One Hundred and Seventy-Nine Thousand Naira Only (N55,179,000.00) to host the participants but with the blessings and support of our fathers, the task is regarded as an accomplished one, Insha Allah”.

He said, “This is the first of its kind to be staged in the whole of North Central Nigeria in a recent year where Kwara is picked. It is also important to know as the tradition that, His Eminence, Sultan of Sokoto and the President General for the Nigeria Supreme Council for Islamic affairs, Alhaji Muhammad Sa’adAbubakarr III CFR is always in attendance to grace the Formal Opening Ceremony. In 2018, IVC was held in Sokoto,2019 in Kano, 2021 in Taraba except 2020 which was the COVID year and now in Ilorin tagged ‘’KWARA2022’’.”

In his acceptance speech, the Chairman of the committee, the former Hon. Kadi of Kwara State Sharia Court of Appeal, Justice Idris Abdullahi Haroon, said that he called to be the chairman of the occasion is a call to serve Allah, promising of but his best in the assignment, which he described as an opportunity to earn Allah’s reward.

Justice Haroon, who recalled his participation in the National IVC once hosted in Ilorin in 1964 at AbdulAzeez Attah Memorial College, Ilorin, said that “KWARA2022” National IVC would be the second time the event would be held in Ilorin and was grateful to the Emir for making him the Chairman of the committee.

He noted that the traditional ruler has the habit of putting everything in the hands of Almighty Allah and he had imbibed the principle, praying to Almighty Allah to make the event a success.

Highlights of the event are a beautiful recitation of the glorious Qur’an, the inaugural meeting of the Committee on the way forward and photographs.

Protest In Sierra Leone Over Cost Of Living

Nigeria: Where Looters Are Still Relevant In Politics