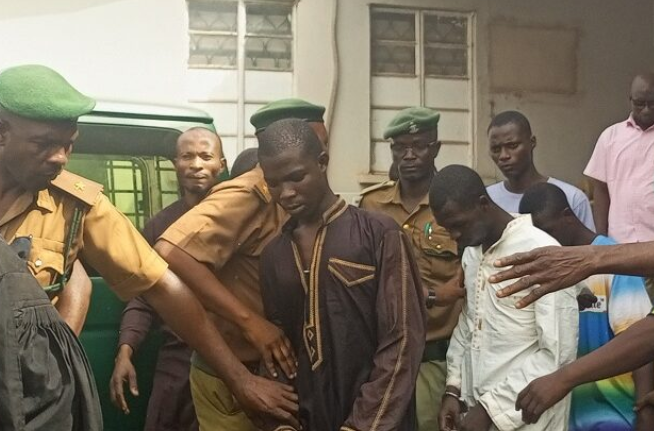 Three of the eight accused persons alleged to have raped and murdered a 24-year-old University of Ilorin student, Olajide Blessing Omowumi on June 2, 2021, have been convicted to death by hanging.

The accused were presented before the court by the Kwara State government in a suit, No KWS/33c/c/2021 on an 11-count charge bordering on armed robbery, illegal possession of firearms and rape.
In the judgement made by Justice Ibrahim Adebayo Yusuf of the Kwara state High Court, Ilorin on Tuesday, the three convicts were found guilty of culpable homicide punishable with death, conspiracy to commit robbery and conspiracy to murder.
The 165-typewritten-page judgement, which got almost the whole courtroom shedding tears while being read by Justice Yusuf, saw even the judge weeping openly for more than two minutes while recounting the process of how the deceased was raped, leading to her death.
The judge held that the gang had the intention of theft and rape without the intention to kill, however, added that their act led to homicide.
Speaking on the judgement, the prosecution counsel and former Attorney General and Commissioner for Justice, Salman Jawondo, who started the case as Attorney General of Kwara State, concluded it as a private legal practitioner on pro bono service. He resigned to contest in the APC primaries for the 2023 general elections.
Jawondo, who spoke with journalists after the court session, gave summary of the court judgement.
“The first, second and third defendants who are the main culprits were found guilty of culpable homicide punishable with death, conspiracy to commit robbery and cospiracy to murder. They were accordingly sentenced to death. That’s maximum. There’s no discretion for the court to exercise by virtue of provision of the armed robbery Act, it’s death. So also by virtue of section 221 of the penal code, it’s death sentence for culpable homicide. So, they were accordingly sentenced to death.
“Although, the third defendant, who was also convicted of rape was sentenced to life imprisonment, but it’s neither here nor there. When somebody is condemned, the life imprisonment does not ameliorate anything
Facebook
Twitter
Pinterest
LinkedIn