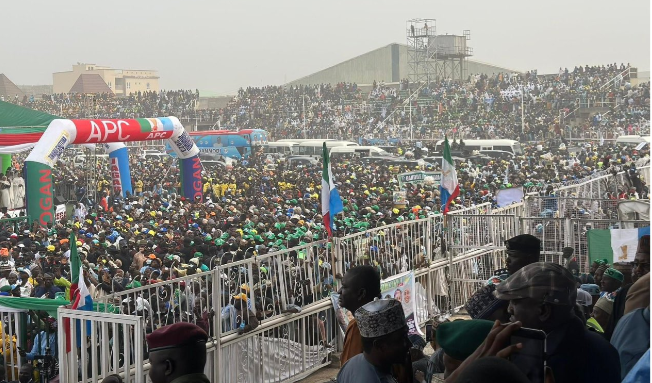 The ancient city of Kano was agog on Wednesday as thousands of supporters of the All Progressive Congress,APC, trooped out to attend the Campaign rally of the Presidential flag bearer of the party, Asiwaju Ahmed Bola Tinubu.

Party loyalists from the 44 local government areas of the state trooped to the state headquarters as early as 6am early before the road show, which started from the Kano state government house 12 noon local time to the Sani Abacha stadium, the venue for the Kano state Presidential campaign launch.

The motorcade journey took hours, as journey of 4 kilometers that takes less than 10 minutes on an ordinary day took close to 3hrs.

The state witnessed heavy tragic jam as security agencies and the Kano state traffic angency KAROTA made efforts to divert routes to allow for free movement for campàigners and livelihoods to go on.

Bands and local musicians were at hand entertaining people including placards with good will messages for the presidential candidate.